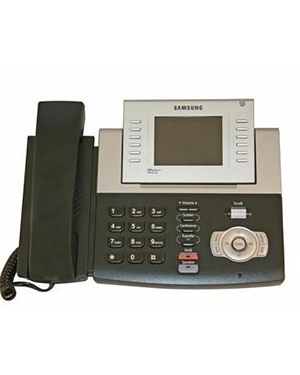 Samsung ITP-5112L 12-button Black IP Phone is a fully features communication device perfect for professional and work environments. It has a large coloured LCD display that is integrated with full duplex speakerphone capability.

Providing convenience to users, Samsung ITP-5112L 12-button Black IP Phone has a navigation key that users can benefit from since it delivers easy feature activation. It is also equipped with 12 feature selection buttons that offer access to lines and functions. In addition to that, it also has a two-port data switch for connection.

Samsung Group is the considered to be the biggest South Korean business conglomerate in the world. It is headquartered in Samsung Town Seoul, South Korea and operates in the global market with the help of more than 10,000 employed experts worldwide.

Established by Lee Byung-lee as a trading company in the year 1938, Samsung has expanded its operations since then and became involved in retail, securities, insurance, textiles, and food processing. Throughout the years, Samsung has expanded to include several business groups under the conglomerate, including the following:

In the year 1987, founder of Samsung died, which gave birth to the division of four major business groups, including Samsung Group, CJ Group, Shinsegae Group, and Hansol Group. Samsung Group has become incredibly influential not only in the global market and the lives of their customers but also in the politics, economic development, culture, and media of South Korea.

Australia-owned and –operated communications enterprise, Telephonesonline Pty Ltd is a reliable supplier and wholesaler of phone devices and solutions in the country. The company is able to provide all types of customers, from SoHos, SMEs, large corporations, and government institutions. SoHos and SMEs can benefit from the company’s affordable refurbished and second-hand phone products and solutions while the latter two can take advantage of its latest and more advanced phone systems and technologies to cater to their more complicated organisational structure.

Telephonesonline uses its extensive product portfolio as its weapon in the market, offering the following popular telecom brands:

Telephonesonline conducts its transactions through its company hotline or its official site at Telephonesonline.com.au, where customers can check out the products with their own hands thru few button clicks.