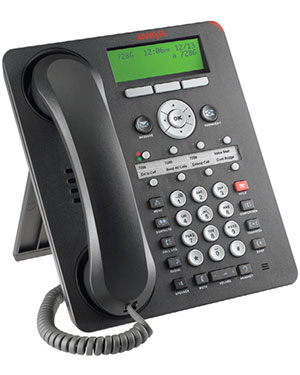 The Avaya 1408 Digital Deskphone (Part number: 700469851) allows 8 administrable buttons (8 line appearance / feature key buttons) with LED signalling (with dual LED’s red and green). The phones are developed for users with the need to see many extensions at a glance and dial with one fingertip (with Fixed feature keys include hold, conference, transfer, drop, menu, contact, call log, redial, mute, and headset). The white backlight of the display allows a very easy readability of the call information even when the surrounding is not really bright (with Backlit display – 3.5” diagonal, 3 rows by 24 characters - For light to moderate everyday telephone users).

*1408 Digital Deskphone presents the most important functions via hardkey, three (3) contextual softkeys and a headset jack

*Compatibility with Avaya Aura Communication Manager 5.2.1 or later and IP Office Release 6.0 or later (Do not try to use a IP Office phone in place of user’s home phone)

Note: The 1400 Deskphones provide support for hands-free (All phones are in the well-known design of the 1600 IP Series, are wall-mountable and black in colour - speakerphone). The most important functions are easy usable via fixed buttons situated around the dial pad (with 8 administrable buttons, each with a red and a green LED and paper labels are designed for users with the need to see many extensions at a glance and dial with one fingertip). 1400 also are expected to be of great interest to customers with regional offices, branches, teams with intensive call handling, secretaries or receptionists in the hotel (intended for cubicle workers, sales staff, and other users with relatively simple telephone needs, the 1408 delivers a straightforward, productivity enhancing interface). 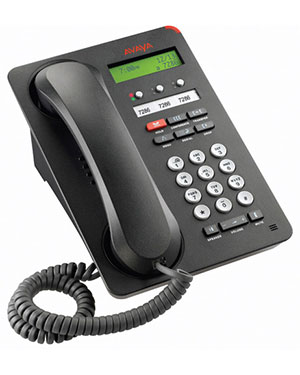 Avaya is a privately held global telecommunications company based in California, United States, founded in 2000. The company specializes in several aspects of the communications industry, including unified collaboration and communication, contact centre operations, and networking. With more than a decade of service in the industry, Avaya was able to penetrate the market of over 42 countries all over the world. This is how wide-range the operations of the company is and from which 10,000 of people are working under. And these people are considered experts in the industry.

Avaya knows the importance of collaboration in businesses and believes that technology is the best weapon to enable and improve this aspect of business’ operations. What the company does is to provide excellent and high-tech tools that will conveniently solve business challenges, saving business their resources. In the end, businesses with work environment that have seamless and effective collaboration platforms are more likely to succeed in their respective endeavours.

Telephonesonline has 20 years of experience in the telecommunications industry. Since the company was created, it has provided hundreds and thousands of business communication products, solutions, and services targeting all kinds of customers in all types of industries. It can also effectively choose and create a package of phone handsets and systems that could cater to customers’ specific telephony needs and requirements. The package customisation offer from the company helps a lot of businesses in making sure that what they purchased are the ideal communication products and solutions that will help their operations and at the same time save their resources.

Telephonesonline also offers outstanding services that can back up the products and solutions that the company offers. It even makes sure that customers’ needs are well met, including inquiries and complaints. If you also have questions that need answering, call the company’s hotline or visit its Telephonesonline.com.au website.